We crossed the border on foot having been evicted from our bus!!

Then boarded another bus which took us to Copacabana a small, lazy beach town, where we stopped for pizza before we headed off for La Paz.

We arrived in La Paz around midnight, dropped off our rucksacks in the hostel and headed to the bar for a free beer! Â At the bar we met a couple who had been on our bus and we hit it off over several more beers!

La Paz is a very poor city, the people appear to have given up hope! The political situation is a shambles. Â We did a walking tour of the city and listened to mad Dave a previous inmate of the infamous San Pedro prison, his stories were erratic but fascinating to actually be sitting outside the prison and hearing his tales!

We didnt dare take a picture of mad Dave or the prison! We were warned that touts still try and persuade innocent tourists to take guided tours of the prison! But after hearing of rape and mysterious diappearances we were not inclined!!

We have however downloaded the true story “Marching Powder” to get a clearer understanding of life inside San Pedro. 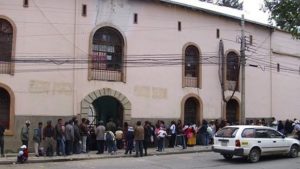 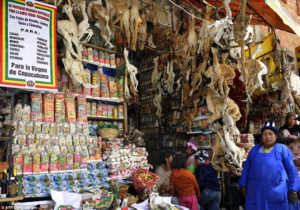 Onwards to the Salt Flats……..