When Tim Berners-Lee came up withthe idea of the internet, he could have had no idea how it change our lives. Sadly, it appears that the Sri Lankan Department of Immigration and Emigration have somehow missed the memo on this one! Tourist visas for most countries allow for a 90 day stay. Extending a visa is generally just a matter of logging on and coughing up the relevant fee. Sri Lanka, no! You get a 30 day number, any longer and you need to turn up for a half day session of queueing and other fun activities.
Thinking we should make an early start, we hopped into a tuk tuk for the trip across town. 3 wheeled vehicles tend to perform best with all 3 wheels on the tarmac! Lewis Hamilton’s barking mad baby brother missed that memo too and carved his way through the Colombo peak hour traffic on his way to a new lap record. He didn’t even miss a beat unpegging a distinctly seedy looking rag to wipe his bonce and re peg it to the frame! The only temporary reprive was the driver stopping for ‘morning food’ from a handy pit lane! Needing both hands to remain inside the tuk tuk ‘morning food’ was not an option for us. Catching a glimpse of a vodka bottle masquerading as a water bottle in the front did little to help our frayed nerves as our chariot finally took the chequered flag and stopped. Sweat wasn’t the issue in the back, a pressing need for new shorts and daks was as we staggered into the office! 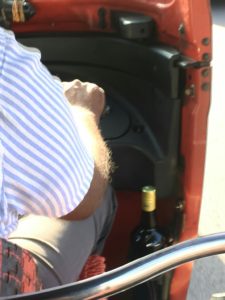 Greeted by wall to wall bodies, (And sweat rags!), we were directed to the 4th floor of another building. A short queue at reception and we were issued some forms to fill in and return. Filling in forms is annoying at the best of times, somewhat more so when there are no surfaces to lean on and nobody seemed game enough to perch on the reception desk. Mission accomplished however, we rejoin the queue with our completed forms. Back at the front we plonk our paperwork on the desk only to have it promptly returned with instructions to join the queue for photos! Not too much later we rejoin the reception queue a few dollars lighter and proud owners of set of shiny new passport photos. Not so fast, our new best friends on the reception desk had one more errand for us to run! Use the glue over there to stick your photo on the form! Seriously? A dollop of school glue and a spot more queueing had us back at reception where we were issued a number and corralled into a waiting area until our number came up on the screen. 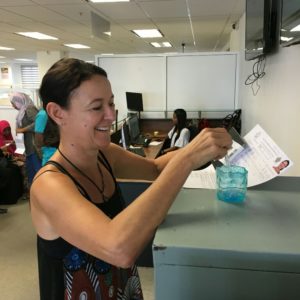 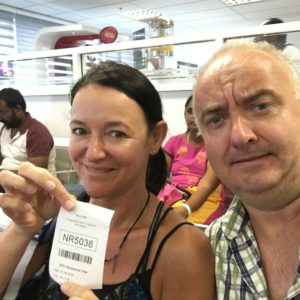 Our number finally appeared and we marched down the corridor for our interview. No such luck, just another waiting room with several dozen other people all still removing the final traces of glue from their fingers. 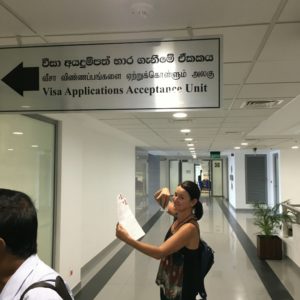 Eventually, our number was called and we went in for our ‘interview’. “How much extra time would you like?” asked the deputy commissioner. “30 days please”. Stamp, stamp, no problem, interview over! ” Please make your way to the payment waiting area and keep a lookout for your number. Oh yippee, another queue. Sadly for those in the queue the staff behind the counter were more focused on social media than collecting cash. Swiping left or right was clearly more interesting than swiping overused credit cards.
Not unsurprisingly, after a wait and having been relieved of another fee we were directed to the visa collections waiting area to await our number! No screen in here, just a woman mumbling into a microphone every few minutes and handing over passports. She wasn’t impressed when I misheard our number and gleefully arrived to collect someone else’s passport!
Correct passports were eventually collected and we ventured outside for another underpant filling journey in the 3 wheeler.